Skip to content
The Four oldest houses in Hawkinsville Georgia

Four of the Oldest houses in Hawkinsville.

Hawkinsville Georgia (Pulaski County) has built a 200 year history in Georgia. From the local cotton and Peanut Gin and stock yards to the first court house that was moved across the river from its original location. Hawkinsville has a long historical past which can be seen in many of the houses still standing today. These houses tell our story about who has lived here and what kind of people they were. They may not have stayed in the same family, but many of the families that bought and sold these houses over the years still live here and tell the stories to each generation as they go. Here are some of the stories of the oldest houses in Hawkinsville.

Hawkinsville (named after Col. Hawkins of the revolutionary war and senator from North Carolina) was established as a major port for cotton and other crops transported up and down the Ocmulgee River in 1808 and became the incorporated county seat in 1830 over old Hartford. Many of the original structures of Hawkinsville were moved here from old Hartford during this time. The establishment of Hawkinsville came soon after this creek Indian land was declared American territory during the turn of the nineteenth century. Some of the oldest houses of that time still stand. Here is just a sample of the houses still standing in Hawkinsville 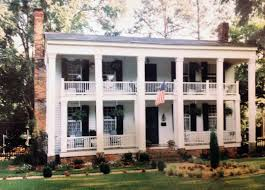 – The oldest house in Pulaski County on record. This house was built by Robert Newsom Taylor from orange county Virginia in 1824 for his fifteen year old bride Louisa with the help of the local creek Indians. Originally built on the bank of Ocmulgee River in old Hartford, it was later dismantled and ferried across the river (like the first Hawkinsville courthouse) to its current location in 1836 as an attempt to escape a local malaria outbreak. It is said many of the joists and beams have the original roman numerals carved in the lumber to keep each piece in order.

– Built in the early 1800’s, This Georgian-plan cottage is the first house built on Merritt St. (which was named after the owners, the Merritt’s).

– Built around 1840, by James Oliver Jelks (Who also built 58 McCormick), this large Greek revival style house that boasts 12 foot ceiling (typical of the times) and still carries many of the original Wavy glass windows. The drive path still holds some of the mounting blocks used by pertains to enter their carriage or mount horses. 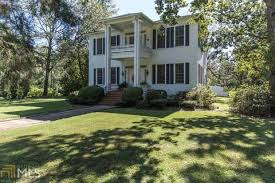 – The house at this address is said to be the oldest house in Pulaski County… still sitting on its original foundation (yes, there was a catch). This house was started around 1830, but was not completed until the 1850’s. Nicknamed the “Hines Folly”, Mr. Hines abandoned the project after completing the foundation and framing. It now sits as a reminder of what persistence can accomplish.

This is just a small example of the oldest historical houses built from the commerce of a great agricultural enterprise. I hope you have the chance to come thru Hawkinsville and see some of the southern history that built Georgia to what it is today. Don’t forget, if you own a house in Hawkinsville and need to sell, we buy houses.